The Inaugural: A Modest Proposal 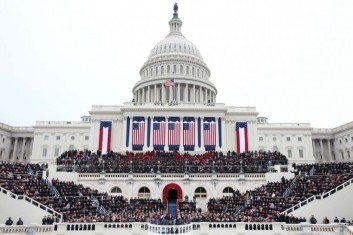 Word on the street is that entertainment options for the 2017 Presidential Inauguration are sparse, and that President-elect Donald Trump is not at all happy about being snubbed by Hollywood.

My initial thought was that they simply call it “An Intimate Evening with Ted Nugent” and sell off the master sponsorship to the NRA. Chachi could be the MC. Yahoo would probably still overpay for the streaming rights and Trump could declare it sensational. Easy breezy.

Then I got to thinking, if I’m not part of the solution, I am the problem. I probably am the problem and will be for at least the next four years, but that’s beside the point. Better that I be helpful. I want to be helpful to PEOTUS and the incoming administration pasted together from the cast of Doctor Faustus. It should be a celebration of, well, something. The new team should be happy. I want to be there for them. To quote Candidate Trump during the debates (insert condescending tone), “It’s very important to me.”

So here’s my pitch, and this will absolutely help the President-elect save face: I will agree to personally appear at the Inauguration Ceremony, the Inaugural Ball, and the Inaugural Parade — a package deal including all three major events — performing LIVE BAND KARAOKE.

Should the organizing committee wish to run a background check on my credentials, I came in 2nd Place in a Thai restaurant competition outside Sacramento two years ago on New Year’s Eve. Okay, that wasn’t exactly Live Band Karaoke, it was a machine, but I have performed Live Band Karaoke all over the Los Angeles basin in clubs so hip no one even knows they exist. I am eminently qualified, practically a shoe-in. I will be amazing. I will be fantastic. I will be spectacular. I will not be a disaster. I will not let down my nation.

Naturally I have a few conditions:

1) Following the swearing-in, I must get an offer to become the President’s head speech writer at market rate with full Congressional retirement benefits when I am fired. Since there is absolutely nothing I admire about the Trump administration and in fact would like it to be hamstrung or eliminated, I am the perfect candidate. I also have never been a political speech writer, which according to the peer group of appointees makes me even more qualified.

2) My inclusive package multi-event fee of $10 million will be donated and shared among all the homeless within the Washington D.C. region.

3) Kellyanne has to play tambourine in the band and no sitting down will be allowed. On select tracks of my choosing she will play cowbell.

4) Jared will buy me lox and bagels for morning brunch after the celebration and cannot leave the deli until I am done talking to him.

5) Donald absolutely cannot have the mic anytime during my gig.

6) Donald must live tweet after every song I sing that “This Ken Goldstein is a live band karaoke sensation and Kanye should give him a record deal.”

7) Donald’s inaugural remarks may not be longer than any of my songs.

8) Bannon must be on the dance floor the entire night but he must dance alone.

9) Ivanka agrees to hand make three separate designer outfits for my lovely wife to accompany me, subject to my lovely wife’s creative approval. Single-origin natural fabrics grown in the USA, please. An advanced consultation on a diverse color palette is recommended but not required. We have high hopes Ivanka is cut from a different cloth.

10) A bowl of coconut pretzel M&M’s must always be in reaching distance for me when I am performing and Reince must hand them to me with a clean white glove one by one, but I will be a mensch and not require the green ones be extracted.

That is one heck of a deal for a high-profile show in desperate need of a headliner — such a bargain, three shows for the price of one! No need to send Trump Force One for me. I’ll use frequent flier miles and sleep in the lobby of the renovated Old Post Office Hotel (I hear the atrium appointments are quite lush and I wouldn’t want to create a conflict of interest actually booking a room there at taxpayer expense).

This is a one-time offer that expires at midnight on the first night of Hanukkah (Jared can help with the deadline).

Okay, let’s see if a signed deal memo shows up on my desk and PEOTUS knows a real deal when he sees one!

Quick footnote:  I do not believe coconut pretzel M&M’s currently exist. Those will be a custom order, but that is not my problem. The organizing committee will have to use its manufacturing expertise to secure the necessary innovation. A mixed bowl of coconut M&M’s and pretzel M&M’s does not count.